Here is an illustrated article taking the reader through the steps of building a Crwth. It has been divided into three parts to facilitate downloading. Personal non commercial printing and sharing and indeed following it to actually make a Crwth are encouraged – but commercial exploitation is not.

In the hand a hundred voices….

“Along with the harp and timpan, the six-stringed crwth was one of the three main string instruments of the Welsh according to the medieval Triads, and an instrument of the aristocracy with its own native repertoire and a strict examination system though which a master crwth player had to pass. A three-stringed version also existed which required less skill and was played by minstrels.

Research over about the last thirty-five years, and particularly experimentation with tunings, have shown it to have been much more versatile and facile than was once assumed, although it definitely was not a prototype of modern orchestral bowed string instruments, which emerged from an altogether different branch of the complex string family tree. Historically, it represents the logical end of a line of development, not an early stage of another.”

Constructionally, the crwth confirms this. It is a mix of the primitive and the sophisticated. Certainly it’s a primitive, dugout canoe kind of instrument, with all but the table and fingerboard carved from one solid piece of wood. But closer accquaintance reveals there is sophistication too, in the way the bridge has one much longer leg which passes through one of the soundholes and takes some of the pressure of the strings away from the front, distributing it on the back of the instrument. The break angle over the bridge is very shallow, also to reduce pressure. The side view is unexpectedly graceful, with a swan neck curve to keep the fingerboard plane in line with the plane of the table, and the arms of the yoke are hollowed for lightness and resonance.

Surviving crwths are very rare  – and it is tempting to surmise that the really lightly built ones that sounded good had only a limited lifespan, reputedly like the best South American guitarrons. Perhaps the few survivors endured because they were substantially built and not much played because they lacked a good sound. Certainly the crwth preserved in the National Library of Wales although in poor condition is the lightest built, looks to have been much played, and is reputed by players to be the best sounding model to follow.

The first step was to prepare plan and elevation templates, indeed templates of everything I could see as being conceivably useful, from the curve where the back curves into the front in two elegant cylinders, to the asymmetrical decorative arabesques where the yoke joins the neck.

The templates are in thin modelmakers ply, and I find it useful when making them to cut nearly to the final line, then to soak the edge in low viscosity superglue (ZAP for preference) then cut to the final line, giving both a clean cut and a hard edge.

The long thin template in the above picture is for the sides – the crwth has a remarkably elegant side view.

Next, a seasoned piece of sycamore is prepared. This is a piece I’ve had over ten years, and is cut exactly on the slab. It needs to be just over template size. Before proceeding further sides are planed, and front and back faces have any twist that might have occurred in the seasoning corrected at this stage. 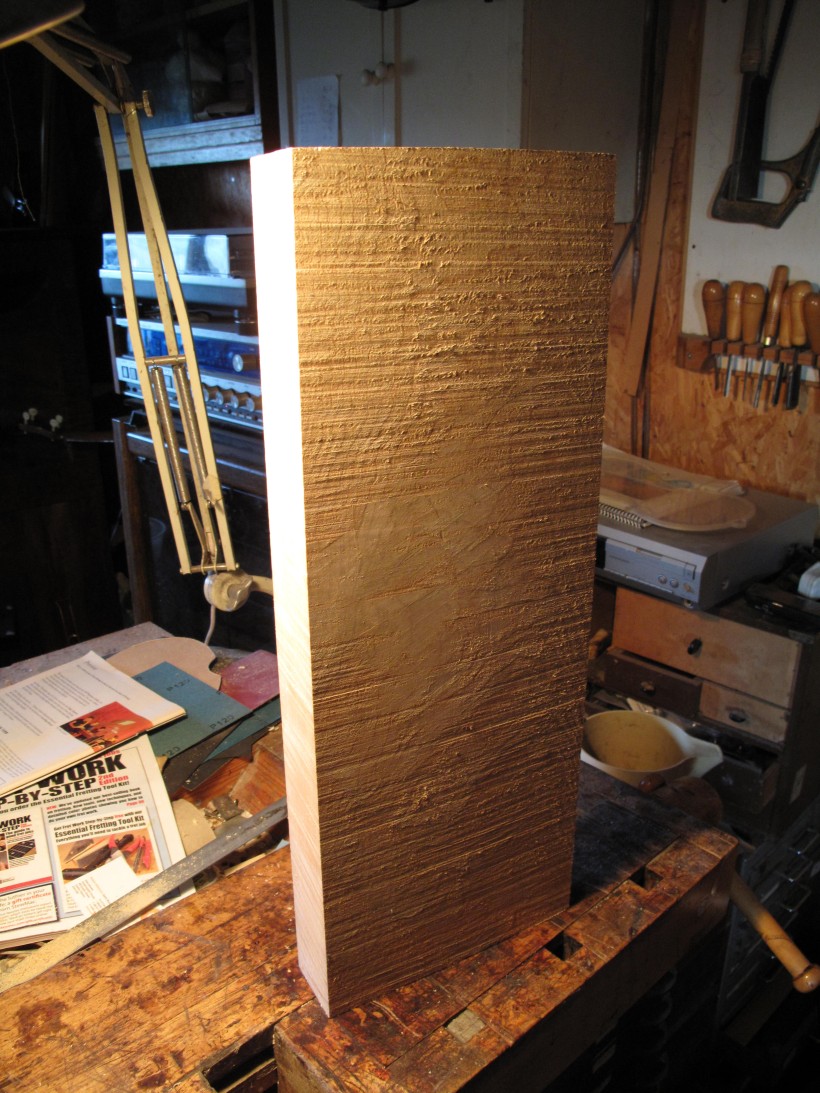 This was too deep a cut for me to trust the bandsaw, and in any case I was feeling – in tune no doubt with the medieval vibe of the instrument – minimum dependence on powertools might be appropriate. So, I bought a cheap hardpoint saw from B&Q and spent an hour or two sawing. 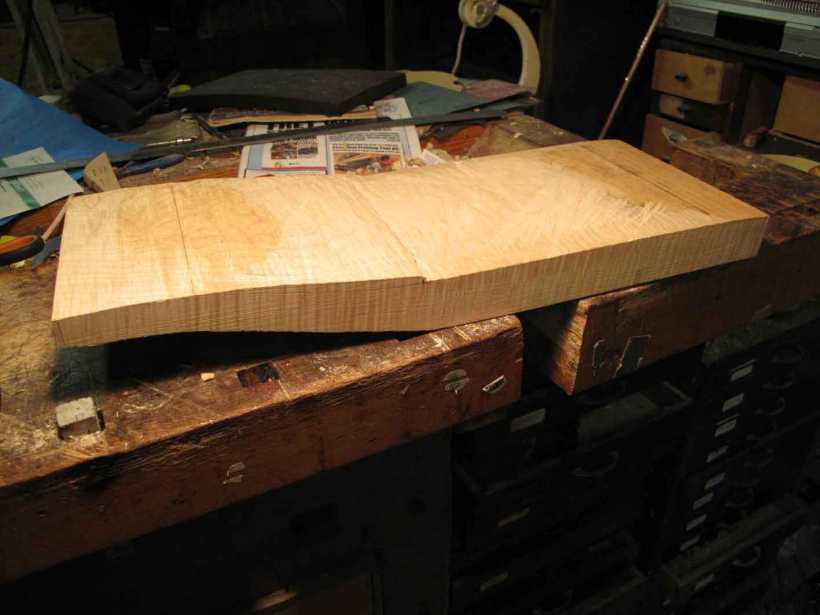 Then some cutting to the marked line with a flat gouge, gouging across the areas that needed to be flat, then establishing flatness in sawn areas by any method that worked reasonably quickly – rasp, plane, scrapers…

The back, which emerged from the B and Q saw a rough sawn surface, needs to be planed flat. Here some beautiful figure is revealed, stripes on the sides and silk-like slab figure on the back.

All this completed, the piece is ready to take the template again.